Another Gift and Heritage from God 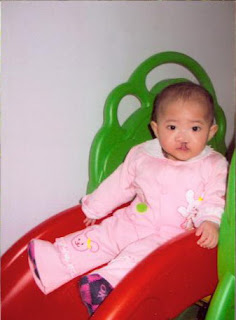 To the left is our new daughter, Abigail Grace Rainey!

Ten days ago our family was driving to a 5-K race to help raise funds for a local pregnancy center when my wife's Blackberry started buzzing. A few seconds later she grabbed my arm in sobs, and while I'm wondering who died, she held up her phone and for the first time, I saw the picture you are now looking at!

For those who read here but were not aware, my wife and I began the process for an international adoption about a year ago. Interestingly enough, we made the decision while on a weekend away from the kids. For many years, we have sensed that God would someday want us to add to our family via an international adoption. In particular, the nation of China has long been on our hearts. Last year, that sense of call expanded to include a heartfelt desire by both of us for a daughter. One year later, it appears God is about to unite us with our little girl.

In case you didn't know, that timeframe itself is a bit of a miracle. According to the law of averages, we were supposed to be waiting for at least another year before being matched. Unbenownst to us, Chinese adoption officials opened up a database not normally accessible to Americans, and our agency was able to gain access--and find our little girl. She was found abandoned by authorities on May 6, 2009, and doctors assessed her age at four days when she arrived at the hospital, meaning that this past Sunday was her first birthday. She currently resides in an orphanage in north-central China, and with the exception of a medically-correctable cleft lip and palate, is believed to be in excellent health.

So at this point, we are simply waiting for an invitation from the U.S. Consulate in this province to travel to pick her up. God willing, sometime in the next 3 to 5 months, Amy and I will be traveling over to get her. In the meantime, I'll be finishing the work downstairs that added another bedroom to our home, and securing family transportation big enough to hold all five of us (the Jeep Liberty is great, but won't hold us all).

For those of you who know us well and have prayed for us during this time, thanks so much for the prayers. The Lord certainly heard them!

We chose her name prayerfully. We will call her "Grace," which is a name that also belonged to her maternal great-grandmother; my wife's grandmother, who was as sweet and godly a woman as has ever walked the earth. Her first name was my choice. Abigail (אֲבִיגַיִל ) was one of the wives of David who showed great strength and character in the face of her first husband's foolish behavior; a woman of great discernment who faced hard situations in the way a worshipper of God should. But its the etymology of her name that was the compelling factor. Abigail means "her father's joy."

Time to update your profile!