False Prophecy is No Laughing Matter: What I've Learned from Harold Camping 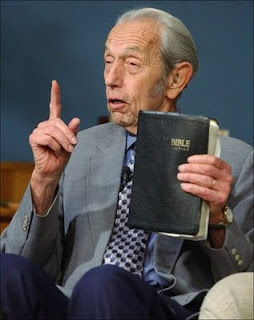 "When a prophet speaks in the name of the Lord, if the word does not come to pass or come true, that is a word that the Lord has not spoken; the prophet has spoken it presumptuously. You need not be afraid of him." -Deuteronomy 18:22, ESV

"But false prophets also arose among the people, just as there will be false teachers among you, who will secretly bring in destructive heresies, even denying the Master who bought them, bringing upon themselves swift destruction." " -2 Peter 2:1 ESV

Let's face it, both the world and the church got a big kick out of Harold Camping's failed prophecy. It wasn't just late night comedians who benefited from Camping's idiocy. Christians everywhere made fun of this man and his prophecies. I should know. I was one of them.

And I was wrong.

By this, I don't mean that I've suddenly begun to grant credibility to Camping and his twisted message. I simply mean that for a follower of Jesus, false prophets and false messages are no laughing matter. They are eternally and deadly serious. And I was reminded of this as I read Al Mohler's article on this issue this morning.

Several weeks ago, I joined many of my non-Christian friends in their mockery of Camping. To be honest, they had some brilliant ideas about how to milk this thing for all it was worth! Leaving clothes on the ground surrounded by dry ice to make it appear as though they had been "raptured" struck a humorous chord with me, and I have to admit to laughing out loud at the pictures.

To be sure, many an Old Testament prophet spent his fair share of time mocking false prophets. (Elijah's suggestion that Baal might be too constipated to play "King of the Hill" on Mt. Carmel comes immediately to mind.) But in the end, even when mockery is employed as an apologetic tool, the seriousness of false prophecy is always made plain in the Biblical text. For the most part, this was not the case on May 21.

So after some reflection on these recent events, I've come to the conclusion that my approach to all this Camping madness was wrong. Though Camping and his "interpretations" are most certainly a joke, what this teaching has done to the name of Jesus Christ for the past 20 years is no laughing matter at all.

Within Christendom, sheep have been led astray by this false teacher, to the point that many of them emptied bank accounts and left gainful employment only to see May 21 come and go, and their livelihoods with it. Outside the body of Christ, many had their focus turned from Jesus to Harold Camping, and beginning early on May 22, secular news outlets turned from merely mocking Camping, to mocking the idea of Jesus' second coming altogether.

The name of Christ was drug through the mud by Harold Camping, and all I did was laugh about it.

Mohler's article this morning simply confirmed for me that the church needs to renew its commitment to confronting false teachers. Like wolves in a sheep pen, it is not sufficient to simply acknowlege their existence. It is not enough to simply identify the wolves among the sheep. We must also draw them out, separate them, and shoot them (not literally of course, but the analogy of wolf-hunting does indicate how ferocious out confrontation of false teachers should be) out of our love for the name of Jesus, and His true sheep.

To be sure, a man who denies the reality of hell, denies the legitimacy of Christ's church and refuses to be held accountable by other brothers in Christ has clearly exhibited the characteristics of a wolf. And wolves are no laughing matter.

So to my non-Christian friends, though it is always fun to laugh with you, I'm very sorry to have misrepresented how serious this issue was to you. Camping is wrong, but Jesus IS coming back . . .to the wailing of those who do not follow Him. It is true that no one knows the day or hour, but that day/hour is coming with absolute certainty, and I am sorry to have wasted an opportunity like this to talk about the REAL second coming of Jesus Christ. Camping does not represent Jesus or His message, but I should have made that message more plain to you.

To my Christian friends, let us commit from this moment on to stand vigilant against anyone who would defame the name of our Lord and Savior. Rest assured, this is not the last time a false prophet will make a ridiculous claim in the name of Jesus. Next time, lets commit to treating this issue as seriously as the Bible does.

Mohler's excellent article can be found here.
Posted by . at Wednesday, June 01, 2011 2 comments: