What Do We Need to Learn from the African Church? 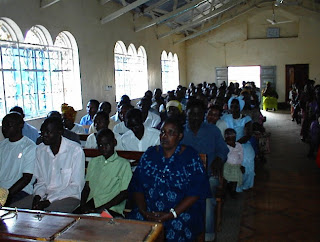 Last night I spent an encouraging hour with a Nigerian Pastor who will be starting a church in our Association this fall to reach immigrants from his home country. To be honest, I've never left a meeting with an African Pastor without being highly encouraged by what God is doing on that continent, and through those from there who now minister on THIS continent!
Alan Hirsch has astutely observed that "the 21st century face of the evangelical church is not the European man, but the African woman." This is a true statement, and there is a reason for that. And my own limited interactions with African Christians to date has convinced me that there are several things we in the west need to learn from our brothers and sisters on that continent. Why is it that the African church leads the 2/3 world in the explosive growth of the church and the expansion of God's Kingdom?
1. Their Commitment to Biblical Authority. Just ask American Episcopalians who have struggled for years between their commitment to their denominational tradition and their conviction that the Scriptures were being violated from Canterbury. It was in that environment that Bible believing Episcopalians received an open invitation from The African Anglican Church to leave their affiliation with the Church of England and join with Anglicans who still hold to Biblical truth.
In the west, much of the church is mired in discussion about everything from just war to sexual ethics. These conversations are necessary, given the environment in which we find ourselves. But even within many evangelical churches, there seems to be an ignorance of the fact that all these issues are ultimately about whether the Scriptures are our final authority in all matters of belief and practice.
Our African brothers and sisters naturally default to this position. As such, I've often found when discussing these issues that their eyes will glaze in disbelief that those who would dare question the right and wrong of such issues could even call themselves Christian. These precious people hold unquestioningly to the Scriptures. They aren't jerks about what they believe, and they don't hate those who disagree. They just sincerely, from the heart, declare the Word of God with authority. The growth we see among African Christians is simply the inevitable result.
2. Their Prayerful Dependence. I find that even the smallest consideration is met with the statement "let me spend a few days talking to the Lord about it, and I'll let you know." These men and women walk with God in a way that embodies 1 Thessalonians 5:16-18. Unlike we in the west, with our propensity to "bookend" meetings filled with our own agendas with prayer asking God to bless what WE have decided to do, our African counterparts walk in constant prayerful dependence, seeking above all else to be guided by the Holy Spirit.
3. Their Patience. We in the west almost idolize the fast-growing and the "quick start" church plants that run hundreds in just a couple of years. To be sure, we should thank God when He chooses to work in such ways rather than giving in to the sin of pastoral jealousy. At the same time, the overwhelming majority of pastors who will never be granted that kind of an environment should sit for a while at the feet of the soon-to-be church planter I spoke with last night. Six years ago he immigrated to the United States, confident that God had called him as an evangelist to help reach the United States with the Gospel. In that time he has personally shared the Gospel, and led many to Christ. But only now, six years later, does he sense God bringing all the pieces together in a way that will finally allow him to plant a church. Most American dudes would have long-since given up. The patient perseverance of our African colleagues is a great model we need to emulate.
4. Their Spiritual Awareness. Simply put, Africans believe in spiritual warfare, because most of them have lived it! Western missionaries and church planters too often neglect to sense the spiritual battle that is going on behind the scenes. But those demonic forces are very, very real, and we ignore their presence, power, and hostility toward our ministry at our own peril. Africans don't ignore it. They freely speak of the reality of demon possession, the angelic, and the power of the Gospel through the ministry of the Holy Spirit. When discussing the hardships of ministry, their conversation naturally gravitates toward the ministry of the Holy Spirit to heal sickness, cast out demons, and regenerate hearts toward God and the Gospel. If you want to know why the African church seems to grow with such power, just observe the power source into which they are openly plugged!
Yep, I'm very thankful that God has sent African brothers and sisters here to the states to help us reach this continent afresh for Jesus. Their attention to areas where we have blind spots is proof enough of our need for them, and I look forward to seeing our Association of churches partner with them.
Posted by . at Friday, April 13, 2012 No comments: