A Vision of the Young and the Old 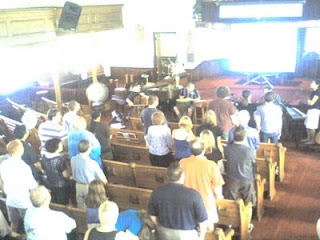 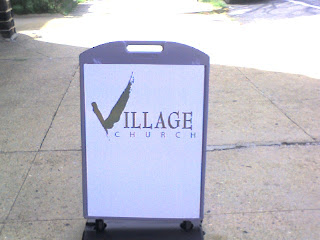 Yesterday was one of those days that remind me why I live in Maryland, and why I do what I do. Our association, in partnership with Embrace Baltimore and several sponsor churches, helped to launch The Village, a new church in the Hampden borogh, just a few blocks from Johns Hopkins University. Between 70 and 75 people came to this inaugural service, more than half of whom were totally unchurched. The birth of a church is an exciting thing to watch.

But the celebration was more intense because of the way in which this new church came about. About two years ago, we began working through one of our churches with the Hampden Bapist Church. Hampden Baptist is an historical congregation to say the least, started in 1874. Their present facility was erected in 1890, and continues to grace the streets of Hampden with its beauty. The old church grew and ministered effectively for many years, and reached its heyday during the 1940s and 1950s, when the average attendance was greater than 800 people!

The following decades brought enormous change to the city, and the congregation, like many urban churches during this time, watched as the majority of its membership took flight to the suburbs. This decline continued precipitously, and when we began our conversations with the church two years ago, attendance hovered at about 35 people.

Through a covenant agreement, we committed ourselves to maintaining the current facility for the church, providing pastoral care and a preacher for Sundays. In the meantime, we would begin putting the pieces together for a new church to be born in Hampden. Once we were ready, the Hampden church pledged to work with us to start this church, recognizing that the future would belong, not to them, but to this new church. Their desire to leave a Gospel legacy in Hampden was the motivation for their commitment.

Several months ago, we recognized that the time had come. I called a meeting with the Hampden congregaion to tell them we were ready to start the new church. However, it would need to meet in their building at the same time that they were currently holding worship, and as such, we needed to ask them to move their services to a different time. I did all of this based on the covenant agreement that all parties signed, but I've been ministering in Baptist churches long enough to know that it doesnt matter what people sign. If they don't want to do something, it simply won't happen!

Again, the people of Hampden Baptist Church demonstrated their commitment to a legacy that would outlive them. They quickly agreed to open up their building for use by The Village during the 11:00 hour. But the moment that got to me came after our meeting had closed. A sweet lady in her 90s came up to me, leaned over her walker, pointed back at Dan Hyun, our church planter, and said "I've been praying for him for the past two years. The Lord promised me months ago while I was praying that He would let me live long enough to meet this young man and see this church started. Now that its happened, I don't know how much longer I have, but I am thanking God this morning for the future He is giving us!"

After that statement, no one will ever be able to convince me that 70, 80, and 90-year-olds don't have vision!

During the services yesterday, I approached the lone trustee to ask him what he thought. After all, the worship style is very different, and the music in particular much louder. His very direct response to me was "We were promised this more than two years ago, and its about time!"

God was at work in Baltimore yesterday, and He is using the vision of both the young and old to bring the people of this community to saving faith in Jesus! I pray He continues to move in this way in our area for His glory!
Posted by . at Monday, September 15, 2008 No comments: 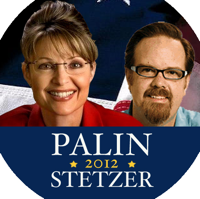 I couldn't help myself! I just had to post this because it is just too funny to resist. My friend and well-known missiological guru Ed Stetzer made a comment on Twitter a couple of nights ago that ultimately resulted in the picture above.

Then again, he's probably best suited for hiw current role. You can read that statement positively (as in "Ed, you are too good at what you do now to leave that role vacant.") or negatively (as in "Ed, keep your day job dude.")

Of course, Ed already has wa more executive experience than Obama! But he's also probably one of those guys who clings bitterly to his guns and religion.